skip to main | skip to sidebar

Quite literally, with mobile and ubiquitous computing, every step we take, every action we perform, every word we say, and every gesture we use - the whole whizbang! - can in principle be recorded digitally and applied as input of some application, stored for later use, or transmitted elsewhere. To understand the full ramifications of this development must be a major theme of future research in ICT.

For many people, this potential future is a cause of alarm. Indeed, it is rife with potential problems such as the collapse of personal privacy, fragmentation of time, erosion of the distinction between home and work, and loss of control. Understanding the reality and the nature of such threats, and finding solutions for neutralising them, are surely a worthy thread of future research.

At the same time, I cannot help thinking that focusing just on the threats and problems of the digital future is insufficient, and may be based on a narrow view that should be relaxed. Underlying the various risk scenarios seems to be the assumption that a malicious third party - the KGB of the future digital society, a criminal organisation, a fraudulent big corporation - is somewhere lurking at the activities of the powerless consumer.

After a century whose first half was dominated by totalitarian governments chiefly occupied with mass murder of their own and other countries' citizens, and second half by triumphant globalisation dominated by multinational giant corporations, this mode of thinking is certainly understandable. Yes I do not see why the future should necessarily re-enact these patterns in a some kind of digitally enhanced Blade Runner world.

Ultimately, the future is what we make it to be, and how it will unfold depends on the decisions and actions we do now. Ideally, research should be able to inform these decisions and actions by studying their outcomes and exposing opportunities they can offer for enabling a better life characterised by freedom of expression, transparency of actions, and ubiquitous availability of information. This world has its own risks, but they are likely to be of a different kind than the Blade Runner world risks.

One of the opportunities that has started to fascinate myself as a researcher is the potentially revolutionary effect ubiquitous and mobile computing can have on sciences studying humans at various levels of scale starting from microscopic scale of neurophysiology and brain research (the operation of a single neuron inside subject's brain) all the way to the macroscopic scale of economics, political sciences, and legal research (the behaviour of millions of people forming a society).

This is not just science fiction. Instead, researchers in HIIT and other units at the future Aalto University have already launched, or are planning to launch, research activities that nicely map to different levels of scale in the above continuum. 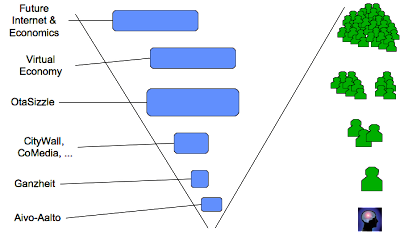 At the microscopic scale, a research team led by academy professor Riitta Hari from TKK's Low Temperature Laboratory have prepared a bold research programme combining brain research with economics to literally study how people use their brain to ponder alternative actions and make decisions. Fittingly, the project will be called "Aivo-Aalto" in Finnish.

At a somewhat higher scale, HIIT and Finnish Institute for Occupational Health recently proposed to Academy of Finland a project called "Ganzheit" which would study mobile human behaviour literally skin-deep. The project aims to combine psychiological sensors with tiny cameras and portable recording equipment to allow comprehensive recording of user's pose, gaze, heart rate, and activity. With this, the project hopes to build a basis for a true breakthrough in cognitive, social, and usability related research, liberating them from the confines of a laboratory to the real world. A related AofF proposal plans to use a similar recording system to collect a massive record of test users' activities for a full year to settle once and for all just how much can be inferred from a maximally detailed data set.

At the next level of scale, several HIIT projects have focused on small-group behaviour and phenomena by building prototype group media services and observing their use (e.g., CoMedia system) and by enabling group interaction on large shared touchscreens (CityWall) or with maps enhanced by augmented reality (MapLens). At still higher level, the OtaSizzle experimentation platform is aimed to uncover user practices and preferences by collecting extensive data from a community planned to include thousands of people. The very highest levels of scale are populated by HIIT's ongoing and planned activities in future Internet economics, virtual economies, and empirical law.

A common thread that runs through all these activities is that they strive to enable a data-driven and experimental mode of research on their particular level of scale. To achieve this, they generally build service prototypes and related platform components for recording, processing, storing, and analysing experimentally derived data. Often they make use of HIIT's competencies in data analysis and probabilistic modelling to extract further insights from the data.

This state of the matters is not a result of some grand vision or foresight. Instead, the individual projects and initiatives have been created opportunistically on the basis of the individual interests of a number of researchers. At best, diffusion of ideas from one researcher to another, or emulation of successful practices and strategies have been at work.

Be that as may, seen as a whole, the portfolio seems to make it possible to introduce data driven, experimental methods in sciences such as sociopsychology, sociology, economics, political science, and legal studies, or at least greatly expand the range of interesting experimental settings that can be studied. If so, entirely new avenues of research in these sciences, and perhaps others, may be possible.

I have started to play with the idea that the portfolio should be recognised as such, and in fact as one of the major research domains of the Aalto University. A fitting title of the whole might be "Digital Human Condition" - no more, no less. Of course, its implementation will require not only extensive co-operation within the Aalto University, but also with various units in the University of Helsinki.

I cannot think of a research spearhead theme that would fit better the scope and promises of the Aalto University.
Lähettänyt Martti Mäntylä klo 16.41 19 kommenttia: